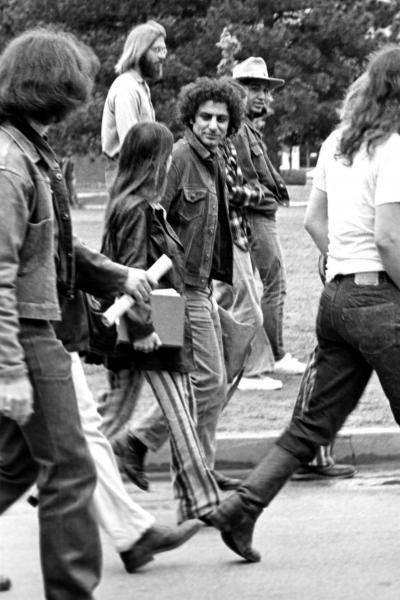 A hero of the 1960s counter culture, Hoffman once told a reporter, "I never left Worcester."

After his death, his brother remembered that "one of the happiest days of his life was [the day] the mayor presented him with a key to the city." His biographer and longtime friend, Jonah Raskin, admits that it was nearly impossible to know "the real Abbie Hoffman" but suggests that Hoffman saw himself as "just a Jewish kid from Worcester." Abbot Hoffman was born in Worcester in 1936 and spent more than half of his life there. Until he was 30, Worcester was the center of his universe. When he moved to New York in 1966, Worcester remained a haven. Even during his years as a fugitive, he would slip back into town and gather with old friends at his favorite restaurant, El Morocco.

Raskin explains that "Worcester provided him with his view of society and his way of dealing with the world." He was a natural comedian, a cut-up who cracked jokes, disrupted class, used obscenities, smoked in the lavatory, dressed like a hoodlum, drove a motorcycle, and picked up girls. His friends called him "Mr. Cool" and regarded him as a hero. An excellent student, he entered Brandeis University in Waltham in 1955. IAfter graduation, he went on to the University of California at Berkeley to get a masters degree in psychology. He returned to Worcester in 1960, married his college sweetheart, and began working as a psychologist at Worcester State Hospital.

He also became a social activist. He wrote for an underground newspaper, The Worcester Punch, and helped found Prospect House, which served the low-income community. He devoted most of his energy to the burgeoning civil rights movement, joining the national civil rights group, the Student Non-Violent Coordinating Committee (SNCC). A local reporter would later remember, "He was the No. 1 civil rights leader in Worcester before Worcester knew [it] had a racial problem."

Hoffman was 30 and recently divorced when he left Worcester in December 1966. He headed to New York City. Rejecting both the brutality and emptiness of American life, he proposed a cultural revolution. Together with Jerry Rubin, he founded the Yippies (Youth International Party), an anarchist group that espoused sexual freedom, drugs, rock music, street theater, and political revolution "just for the hell of it."

By 1967, Abbie Hoffman had become a household name.  "I grew up thinking democracy is not some place you hang your hat . . . It's something you do," he wrote in his autobiography. In August of 1968, the Yippies organized a Festival of Life to coincide with the Democratic National Convention in Chicago. Their circus-like activities disrupted the convention and led to a violent confrontation between protestors and police. Hoffman and seven others — "the Chicago Eight" — were arrested and tried for inciting a riot. The nationally-televised trial was just the kind of public exposure Hoffman craved; he was eventually acquitted on all charges.

In the late 1960s, he began putting his ideas into books. Revolution for the Hell of It (1968), Woodstock Nation (1969), and Steal this Book (1971). A heavy drug user since moving to New York, he was arrested for cocaine trafficking in 1973. He went underground to avoid a mandatory life sentence, had plastic surgery, and emerged as "Barry Freed," an ecological activist. Hoffman came out of hiding in 1980, served a brief prison sentence, and then attempted to revive his career as a campus activist. His first appearance was at Clark University in Worcester. But times had changed, and Hoffman found few students who were interested in his radical creed. He had suffered for years from bi-polar disorder, and by 1989 was overwhelmed by depression.

On April 12, 1989, he took a massive drug overdose and died. The memorial service was held in his hometown, because, his brother said, Abbie "loved Worcester." Mourners were invited to join a peace march from his boyhood home to the synagogue where he had been bar mitzvahed 40 years before. Two hundred people were expected; over 900 came.

While many in Worcester and throughout the country considered Abbie Hoffman a dangerous radical, others admired him as a man who had the courage to question the status quo.

From Mass Moments, A Project of Mass Humanities

END_OF_DOCUMENT_TOKEN_TO_BE_REPLACED

This feature require that you enable JavaScript in your browser.
END_OF_DOCUMENT_TOKEN_TO_BE_REPLACED

This feature require that you enable JavaScript in your browser.
END_OF_DOCUMENT_TOKEN_TO_BE_REPLACED

This feature require that you enable JavaScript in your browser.
END_OF_DOCUMENT_TOKEN_TO_BE_REPLACED