All the untidy activity continues, awful but cheerful.
—Inscribed on Elizabeth Bishop's gravestone at Hope Cemetery in Worcester 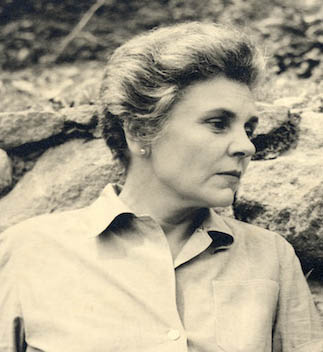 Elizabeth Bishop was born in 1911 in Worcester and grew up here and in Nova Scotia. Her father died before she was a year old and her mother suffered seriously from mental illness. Raised first by her maternal grandparents in Nova Scotia, Bishop’s wealthy paternal grandparents eventually brought her to live in Massachusetts. Since Bishop's death in 1979, her reputation has grown to where many critics refer to her as “one of the most important American poets of the 20th century.” Bishop published only 101 poems during her lifetime. Her verse is marked by precise descriptions of the physical world and an air of poetic serenity, but her underlying themes include the struggle to find a sense of belonging, and the human experiences of grief and longing.

Bishop was educated at Vassar College where she met Marianne Moore, a fellow poet who also became a lifelong friend. Working with a group of students that included Mary McCarthy, Eleanor Clark, and Margaret Miller, she founded the short-lived but influential literary journal Con Spirito. After graduating, Bishop lived in New York and traveled extensively in France, Spain, Ireland, Italy, and North Africa. Her poetry is filled with descriptions of her journeys and the sights she saw.

In 1938, Bishop moved to Key West, where she wrote many of the poems that eventually were collected in her first volume North and South (1946). Her second poetry collection, Poems: North & South/A Cold Spring (1955) received the Pulitzer Prize. In 1944 she left Key West, and for 14 years she lived in Brazil with her lover, the architect Lota de Macedo Soares in Pétropolis. After Soares committed suicide in 1967, Bishop spent less time in Brazil than in New York, San Francisco, and Massachusetts, where she took a teaching position at Harvard in 1970. That same year, she received a National Book Award in Poetry for The Complete Poems. Her reputation increased greatly in the years just prior to her death, particularly after the 1976 publication of Geography III and her winning of the Neustadt International Prize for Literature. Analyzing her small but significant body of work for Bold Type, Ernie Hilbert wrote: "... her poems are balanced like Alexander Calder mobiles, turning so subtly as to seem almost still at first, every element, every weight of meaning and song, poised flawlessly against the next.”

Bishop worked as a painter as well as a poet, and her verse, like visual art, is known for its ability to capture significant scenes. Though she was independently wealthy and enjoyed a life of some privilege, much of her poetry celebrates working-class settings: busy factories, farms, fishing villages and the places she lived. Steve Siddle wrote in Worcester Magazine: "Worcester and New England loom large in much of her most famous poems. Indeed, after all her travels she chose to be buried here. It is as if she were continuing a conversation with where she came from, with who she was, and where it all went down."

Love Unknown: The Life and Worlds of Elizabeth Bishop (Hardcover)

END_OF_DOCUMENT_TOKEN_TO_BE_REPLACED

This feature require that you enable JavaScript in your browser.
END_OF_DOCUMENT_TOKEN_TO_BE_REPLACED

This feature require that you enable JavaScript in your browser.
END_OF_DOCUMENT_TOKEN_TO_BE_REPLACED

This feature require that you enable JavaScript in your browser.
END_OF_DOCUMENT_TOKEN_TO_BE_REPLACED