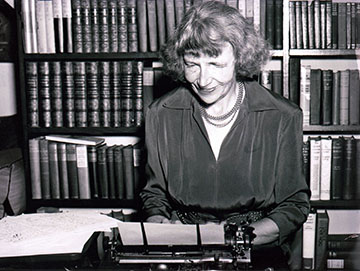 Esther Louise Forbes (June 28, 1891 – August 12, 1967) was an American novelist, historian and children's writer who received the Pulitzer Prize and the Newbery Medal. She was born in Westborough, MA, on June 28, 1891, the fifth of the six children of William Trowbridge Forbes and Harriette Merrifield. Her first short story entitled "Breakneck Hill," was published in the Grinnell Review. It won the O.Henry Award for short stories in 1915.

In 1918 she worked for Houghton Mifflin as a typist but was soon transferred to another position reading unsolicited manuscripts, as apparently she couldn't spell. She married Albert L. Hoskins, Jr., an attorney, on January 14, 1926, and left Houghton Mifflin. The couple moved to New York City. Her first novel, O Genteel Lady! was published in 1926 and was selected as the second book for the Book of the Month Club, guaranteeing over 12,000 copies sold. In 1933, she and Albert Hoskins divorced. Although she retained her married name, she wrote under her maiden name, Esther Forbes.

Forbes returned to Worcester in 1933, where she lived with her mother and unmarried siblings. At this time, her mother, Harriette M. Forbes, began working closely with Forbes on the research for her novels, primarily at the American Antiquarian Society. In 1935, Miss Marvel, in 1937, Paradise, and in 1938, The General's Lady, were published. Each of these were historical novels set in New England from colonial times through the early years of the Republic.

In a break from her fiction, Forbes wrote a definitive biography of Paul Revere, Paul Revere and the World He Lived In (1942), for which she received the 1943 Pulitzer Prize for History. Also in 1943, she received an honorary Doctor of Letters degree from Clark University.

Forbes’s Johnny Tremain: A novel for Young and Old was published by Houghton Mifflin in 1943. Johnny Tremain was unique in interpreting the story of the American Revolution through the eyes of a boy. "Esther Forbes's power to create, and to recreate, a face, a voice, a scene takes us as living spectators to the Boston Tea Party, to the Battle of Lexington and of North Creek." (The Saturday Review, 1943). Johnny Tremain won the John Newbery Medal for most distinguished contribution of the year to children's literature and was produced as a movie by Walt Disney. The book has never been out of print.

In 1947, Forbes received the Metro-Goldwyn-Mayer novel award of $150,000 for her then forthcoming book, The Running of the Tide, published in 1948. In 1949, she was elected a Fellow of the American Academy of Arts and Sciences and in 1960, Forbes became the first woman elected to membership in the American Antiquarian Society.

Esther Forbes deeded the royalties from all her popular historical novels to the AAS.

Adapted from Wikipedia, WPI: A City of Words, the Worcester Writer's Project, and the American Antiquarian Society

Photo: Esther Forbes at her typewriter, courtesy of the Worcester Historical Museum

A Mirror For Witches; with Woodcuts by Robert Gibbings. 1928.

Paul Revere And The World He Lived In (Paperback)

END_OF_DOCUMENT_TOKEN_TO_BE_REPLACED

This feature require that you enable JavaScript in your browser.
END_OF_DOCUMENT_TOKEN_TO_BE_REPLACED

This feature require that you enable JavaScript in your browser.
END_OF_DOCUMENT_TOKEN_TO_BE_REPLACED

This feature require that you enable JavaScript in your browser.
END_OF_DOCUMENT_TOKEN_TO_BE_REPLACED