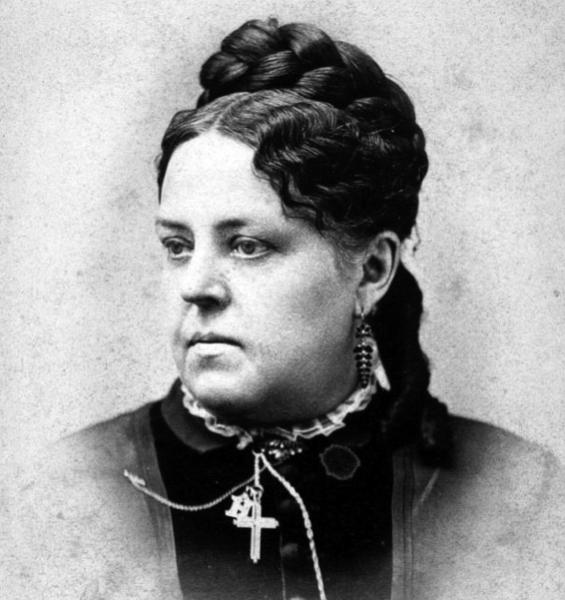 Esther Howland (1828–1904) was an artist and businesswoman, born in Worcester, Massachusetts, who was responsible for popularizing Valentine's Day greeting cards in America. [Learn more about Esther Howland and Worcester's rich Valentine history from Making Valentines: A Tradition in America online at the American Antiquarian Society and from online entries at the Worcester Historical Museum.]

Shortly after graduating, Esther received a valentine from a business associate of her father's.The valentine was decorated with an elaborate fine lace border and cut out ornate flowers that had been colored and pasted on. In the center of the valentine was a small pale green envelope that contained a note with a red border and a verse appropriate for Valentine's Day. At this time, elaborate Valentine greeting cards were imported from Europe and not affordable to many Americans. Determined that she could make a better more economical valentine, she convinced her father to order supplies from New York City and England. She made a dozen samples which her salesman brother added to his inventory. Hoping for $200.00 worth of orders, she was elated when he returned from a sales trip with over $5,000.

Esther Howland employed friends and developed a thriving business in Worcester. She was in charge of cutting the basic design for the individual valentines while her employees were responsible for carefully copying each card. She also hired women who had to work from home by preparing a box with all the materials required. According to Howland, her girls were paid "liberally" and the work was "light and pleasant."  Her early cards contained short four line verses pasted inside much like earlier English valentines. This set-up would eventually become standard for the valentine market.

In 1850 her first advertisement appeared in the Worcester Spy. In order to distinguish her valentines, Esther began stamping the letter "H" on the back of the cards in red ink along with the price and the letters ‘N.E.V.Co.’ which stood for the name of her company, New England Valentine Company incorporated in 1870. Esther also created Christmas cards, New Years cards, Birthday cards, Booklets, and May baskets.

In 1879 Esther decided to merge her business with one of her competitors, Edward Taft. The business eventually grossed over $100,000 per year, a considerable sum for that time, and she eventually sold the business to George Whitney in 1880 in order to take care of her ailing father.

Esther Howland created many innovations of valentine designs. She introduced the layering of lace, use of thin colored paper, three dimensional accordion effects and a bouquet in which flowers would move to reveal a verse when pulled by a string. Her valentines became renowned throughout the United States and she was called "The Mother of the American Valentine."

END_OF_DOCUMENT_TOKEN_TO_BE_REPLACED

This feature require that you enable JavaScript in your browser.
END_OF_DOCUMENT_TOKEN_TO_BE_REPLACED

This feature require that you enable JavaScript in your browser.
END_OF_DOCUMENT_TOKEN_TO_BE_REPLACED

This feature require that you enable JavaScript in your browser.
END_OF_DOCUMENT_TOKEN_TO_BE_REPLACED