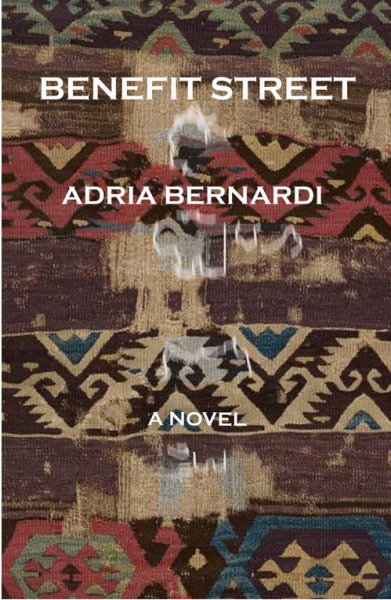 A universal story of exile, of the refugee and emigrant, and of all those displaced who can reconstruct a sense of home only by weaving a new fabric of the imagination   For nearly two decades, Şiva has met after work on Tuesdays with four friends at a teahouse called the Kafiye. In interrupted conversations, the women explore what it is to live engaged lives inside and outside the home. Amidst joking and complaints, while drinking too much tea and eating too many sweets, they tell of their days: a son’s ninth birthday, the bruise on the arm of an aging parent, soldiers stationed outside the school, the funeral of an opposition political leader killed in a mysterious car accident.

Set in an unnamed provincial capital of an unnamed country, Benefit Street tells of a wide circle of friends—teachers, lawyers, missionaries, doctors, artisans—in a time of gathering and dispersal. It tells the story of mothers, daughters, sisters, wives, colleagues, and neighbors, as war to the East threatens and constitutional rights are daily eroded by an increasingly authoritarian regime.

The ideals of youth, freedom, and coexistence are severely tested with the shocking revelation that the charismatic leader of their group has sexually abused the women under his care. The limits of reconciliation are tested as Şiva makes an arduous journey into the mountains to meet an estranged mother with a genius for weaving complex rugs.

Adria Bernardi is a writer and translator whose publications include an oral history, a collection of essays, a collection of short stories, two novels, and eight translations from the Italian. Her work has been awarded the Bakelsess Prize for Fiction, the Drue Heinz Literature Prize, and the Raziss/DePalchi Translation Award.

END_OF_DOCUMENT_TOKEN_TO_BE_REPLACED

This feature require that you enable JavaScript in your browser.
END_OF_DOCUMENT_TOKEN_TO_BE_REPLACED

This feature require that you enable JavaScript in your browser.
END_OF_DOCUMENT_TOKEN_TO_BE_REPLACED

This feature require that you enable JavaScript in your browser.
END_OF_DOCUMENT_TOKEN_TO_BE_REPLACED