Before the Flood with Elisabeth Rosenberg 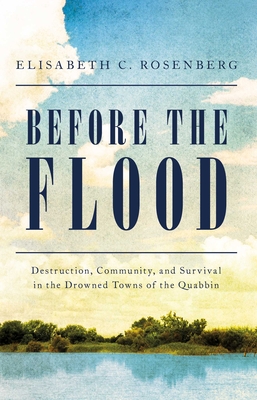 IN-STORE Event with Elisabeth Rosenberg, author of Before the Flood: Destruction, Community, and Survival in the Drowned Towns of the Quabbin
Tuesday, October 19, 2021 at 7:00pm
BUY THE BOOK

Registration is required. This event is limited to 25 attendees. Please email or call us to register: 508-753-2500. Masks are required.

In the tradition of Silent Spring, a modern parable of the American experience and our paradoxical relationship with the natural world.

Though it seems a part of the "natural" landscape of New England today, the Swift River Valley reservoir, dam, dike, and nature area was a triumph of civil engineering.  It combined forward-looking environmental stewardship and social policy, yet the “little people”—and the four towns in which they lived—got lost along the way.  Elisabeth Rosenberg has crafted Before the Flood to be both a modern and a universal story in a time when managed retreat will one day be a reality.

Meticulously researched, Before the Flood, is the first narrative book on the incredible history of the Swift River Valley and the origins Quabbin Reservoir. Rosenberg dives into the socioeconomic and psychological aspects of the Swift River Valley’s destruction in order to supply drinking water for the growing populations of Boston and wider Massachusetts.

It is as much a human story as the story of water and landscape, and Before the Flood movingly reveals both the stories and the science of the key players and the four flooded towns that were washed forever away.

“Rosenberg seeks to challenge ‘binary’ histories of the event, which cast townspeople as the ‘losers’ and state government officials and Boston residents as the ‘victors,’ Rosenberg spotlights the engineers, who lived in the towns and became active community members, even as they plotted ‘the death of the Swift River,’ [and] she uncovers the mutual respect that grew between them over the course of the project. Intriguing.”— Publishers Weekly

Elisabeth C. Rosenberg is a writer and editor who focuses on the interplay between individuals, demographic groups, and disruptive technology. She has contributed to The Boston Globe, Boston Magazine, Fast Company, Harvard University Press, and the Electronic Privacy Information Center. She divides her time between Washington, DC, and Amherst, MA.

Before the Flood: Destruction, Community, and Survival in the Drowned Towns of the Quabbin (Hardcover)

END_OF_DOCUMENT_TOKEN_TO_BE_REPLACED

Check out our list of books selected to complement the Worcester Historical Museum's landmark exhibition on now!

This feature require that you enable JavaScript in your browser.
END_OF_DOCUMENT_TOKEN_TO_BE_REPLACED

This feature require that you enable JavaScript in your browser.
END_OF_DOCUMENT_TOKEN_TO_BE_REPLACED

This feature require that you enable JavaScript in your browser.
END_OF_DOCUMENT_TOKEN_TO_BE_REPLACED