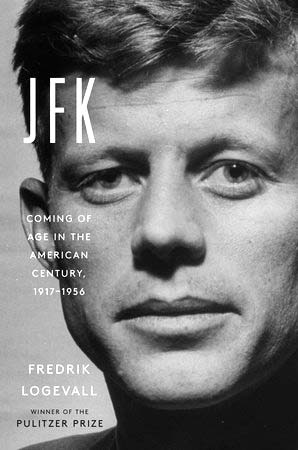 An utterly incandescent study of one of the most consequential figures of the twentieth century.
—Jill Lepore, author of These Truths: A History of the United States

JOIN TIDEPOOL BOOKSHOP  FOR A READING AND DISCUSSION with FREDRIK LOGEVALL
Tuesday, November 24, 2020 at 7:30pm via ZOOM

Space is limited. Please register now by emailing us at: registration@tidepoolbookshop.com

A Pulitzer Prize–winning historian takes us as close as we have ever been to the real John F. Kennedy in this revelatory biography of the iconic, yet still elusive, thirty-fifth president.

By the time of his assassination in 1963, John F. Kennedy stood at the helm of the greatest power the world had ever seen, a booming American nation that he had steered through some of the most perilous diplomatic standoffs of the Cold War. Born in 1917 to a striving Irish American family that had become among Boston’s wealthiest, Kennedy knew political ambition from an early age, and his meteoric rise to become the youngest elected president cemented his status as one of the most mythologized figures in American history. And while hagiographic portrayals of his dazzling charisma, reports of his extramarital affairs, and disagreements over his political legacy have come and gone in the decades since his untimely death, these accounts all fail to capture the full person.

Beckoned by this gap in our historical knowledge, Fredrik Logevall has spent much of the last decade searching for the “real” JFK. The result of this prodigious effort is a sweeping two-volume biography that properly contextualizes Kennedy amidst the roiling American Century. This volume spans the first thirty-nine years of JFK’s life—from birth through his decision to run for president—to reveal his early relationships, his formative experiences during World War II, his ideas, his writings, his political aspirations. In examining these pre–White House years, Logevall shows us a more serious, independently minded Kennedy than we’ve previously known, whose distinct international sensibility would prepare him to enter national politics at a critical moment in modern U.S. history. Along the way, Logevall tells the parallel story of America’s midcentury rise.

As Kennedy comes of age, we see the charged debate between isolationists and interventionists in the years before Pearl Harbor; the tumult of the Second World War, through which the United States emerged as a global colossus; the outbreak and spread of the Cold War; the domestic politics of anti-Communism and the attendant scourge of McCarthyism; the growth of television’s influence on politics; and more. JFK: Coming of Age in the American Century, 1917–1956 is a sweeping history of the United States in the middle decades of the twentieth century, as well as the clearest portrait we have of this enigmatic American icon.

Fredrik Logevall is the Laurence D. Belfer Professor of International Affairs at the John F. Kennedy School of Government and Professor of History, Harvard University. A specialist on U.S. foreign relations history and modern international history, he was previously the Anbinder Professor of History at Cornell University, where he also served as vice provost and as the director of the Mario Einaudi Center for International Studies. Logevall is the author or editor of ten books, most recently JFK: Coming of Age in the American Century, 1917-1956 (Random House, 2020). His book Embers of War: The Fall of an Empire and the Making of America’s Vietnam (Random House, 2012), won the 2013 Pulitzer Prize for History and the 2013 Francis Parkman Prize, as well as the 2013 American Library in Paris Book Award and the 2013 Arthur Ross Book Award from the Council on Foreign Relations. His other recent works include America’s Cold War: The Politics of Insecurity (with Campbell Craig; 2nd ed., Belknap/Harvard, 2020), and the college-level textbook A People and A Nation: A History of the United States (with Jane Kamensky et al; 11th ed., Cengage, 2018). A native of Stockholm, Sweden, Logevall holds a PhD in History from Yale University. He is a past president of the Society for Historians of American Foreign Relations.

END_OF_DOCUMENT_TOKEN_TO_BE_REPLACED

This feature require that you enable JavaScript in your browser.
END_OF_DOCUMENT_TOKEN_TO_BE_REPLACED

This feature require that you enable JavaScript in your browser.
END_OF_DOCUMENT_TOKEN_TO_BE_REPLACED

This feature require that you enable JavaScript in your browser.
END_OF_DOCUMENT_TOKEN_TO_BE_REPLACED