IN-STORE Discussion with Linda Hixon and Shawn Driscoll, co-authors with Christian Farren of The Grip: The 1918 Pandemic and a City Under Siege
Thursday, August 26, 2021 at 5:30 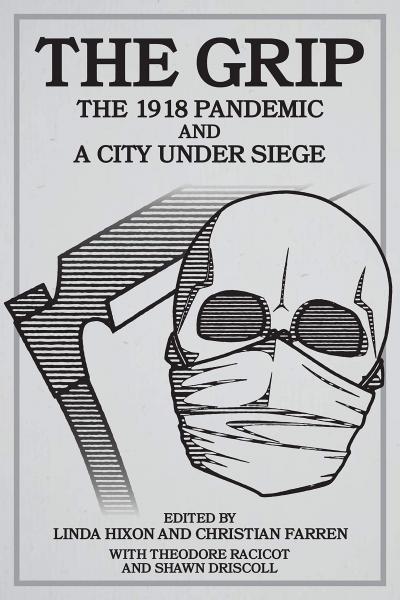 It came so quickly and hit so hard nobody really knew what to do. Suddenly, people were dying. Suddenly, businesses were closed and masks were required and it was frightening to even get on public transportation. Suddenly, the world turned upside-down and no one knew how to make it stop. It was the influenza pandemic in the fall of 1918 and nothing seemed safe. This was the modern world, with cars and telephones, movie theaters and mass media. And it was struck by a version of the flu never seen before, a flu which killed those in the prime-of-life, attacking their lungs until their faces turned plum, causing them to bleed even from their eyes.

As quickly as it came it seemed to disappear with the end of the Great War. But it wasn’t over. As restrictions eased and life returned to normal, the flu came back… The Grip: The 1918 Pandemic and a City Under Siege tells the story of Worcester, Massachusetts, the third largest city in New England at the time, as it struggled to contain a contagion. Written by academics, historians, high school students and local volunteers, it delves in to a time we thought would never happen again.

In Worcester in 1918, politics and science clashed, leading to the deaths of over 1,000 people, most of them struggling workers and immigrants just trying to survive.

END_OF_DOCUMENT_TOKEN_TO_BE_REPLACED

This feature require that you enable JavaScript in your browser.
END_OF_DOCUMENT_TOKEN_TO_BE_REPLACED

This feature require that you enable JavaScript in your browser.
END_OF_DOCUMENT_TOKEN_TO_BE_REPLACED

This feature require that you enable JavaScript in your browser.
END_OF_DOCUMENT_TOKEN_TO_BE_REPLACED