Loaded with Dynamite: H.D.S. Greenway in Conversation with Ted Widmer 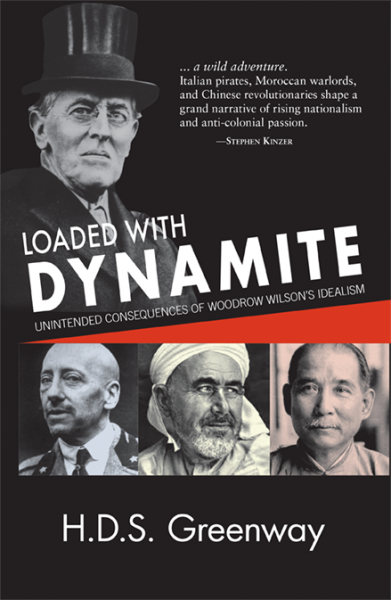 Virtual Discussion via Zoom with H.D.S. Greenway, author of Loaded with Dynamite, and Ted Widmer
Tuesday, September 28, 2021 at 5:30

Click here to register on Eventbrite or call us: (508) 753-2500. Zoom details will be sent to registrants the day of the event.

“LOADED WITH DYNAMITE,” was the prescient reaction of Woodrow Wilson’s secretary of state when he heard the president promote national self-determination at the Paris Peace Conference in 1920. Wilson’s call became a rallying cry to the many rather than the select few for whom it was intended.

Colorful and resolute, the three nationalists led rebellions that transcended their place and time. In no small part, d’Annunzio begat Mussolini; Abd el-Krim begat the post World War I armed resistance to colonialism that would lead to Vietnam, Algeria, and the end of empires; and Sun Yat-sen begat both Mao and Chiang Kai-shek. Each has been chronicled separately, but Greenway has persuasively connected them and identified their shared root in Wilson’s inspired but empty rhetoric. Historically compelling and profoundly relevant today, Loaded with Dynamite enriches contemporary questions about globalization and the trade-offs between engagement and isolation that remain as perplexing today as they were a century ago.

Woodrow Wilson’s soaring rhetoric of self-determination and democracy at the Versailles peace conference of 1919 failed to sway the great powers, but it inspired revolts in Italy, Morocco and China. Greenway gives us a clear and succinct description of the politics that crucial summer. More important, he gives us brilliant portraits of the fascinating rebels, Gabriele d’Annunzio, Abd el-Krim and Sun Yat-sen, all of whom have had enduring legacies.
—FRANCES FITZGERALD, author of The Evangelicals: The Struggle to Shape America and Fire in the Lake: The Vietnamese and the Americans in Vietnam

H.D.S. GREENWAY was born in Boston, and educated at Yale, Oxford, and Harvard. After serving in the U.S. Navy, he was a foreign correspondent for Time magazine and the Washington Post, and served as foreign editor, national editor, and opinion page editor of the Boston Globe. Reporting from ninety-six countries, he was also a contributing columnist for the International Herald Tribune and Global Post. He lives with his wife, JB Greenway, in Needham, Massachusetts.

TED WIDMER is Distinguished Lecturer at Macaulay Honors College (CUNY). In addition to his teaching, he writes actively about American history in The New York Times, The New Yorker, The Washington Post, and other venues. He has also taught or directed research centers at Harvard University, Brown University, and Washington College. He grew up in Massachusetts and Rhode Island, and attended Harvard University.

END_OF_DOCUMENT_TOKEN_TO_BE_REPLACED

This feature require that you enable JavaScript in your browser.
END_OF_DOCUMENT_TOKEN_TO_BE_REPLACED

This feature require that you enable JavaScript in your browser.
END_OF_DOCUMENT_TOKEN_TO_BE_REPLACED

This feature require that you enable JavaScript in your browser.
END_OF_DOCUMENT_TOKEN_TO_BE_REPLACED