Nick Braccia - Off the Back of a Truck 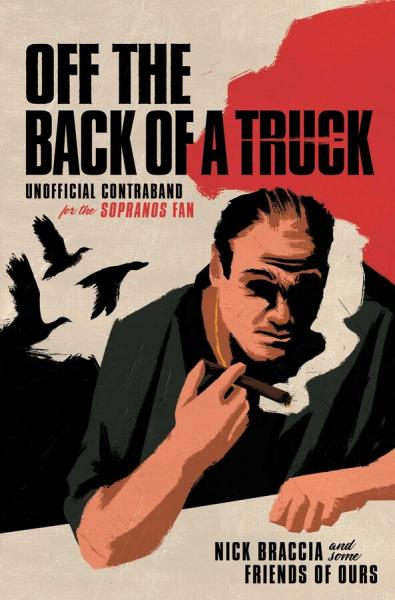 Discussion and Reading with Nick Braccia author of Off the Back of a Truck
Thursday, June 30 2022 at 7:00pm, VIA ZOOM
Email us to register.

"More delicious than a slice of gabagool and ten times funnier than a screening of Cleaver, Off the Back of a Truck is an absolute must-read for any Sopranos super-fan. Insightful, witty, and astoundingly detailed, Nick Braccia's guide to the life and maybe-death of Tony Soprano is the next best thing to a trip to the Bada Bing."
—Barry Hertz, Film Editor at The Globe and Mail

Unleash your inner Soprano and relive all your favorite moments with this companion guide to the award-winning television series The Sopranos.

We all know and love The Sopranos, one of the most important television dramas to ever hit the small screen, having run for six seasons on HBO. The story of the Italian-American mobster Tony Soprano balancing his family life with his role as the leader of a criminal organization pioneered decades of genre-bending “peak TV.”

Now, Off the Back of a Truck takes you one step further into the world of Tony Soprano and his families, offering an Italian potluck of fresh and fun takes that any true fan can get lost in for hours.

Off the Back of a Truck includes:
-New looks at everyone’s favorite episodes, scenes, and characters
-All 92 deaths analyzed, evaluated, and ranked
-An investigation of true crimes behind the families’ schemes
-An exploration of movies and shows that inspired The Sopranos
-Reflections on the use of music, food, and fashion from writers who are also huge fans
-A provocative conversation about what happens in the controversial ending

This book takes you on a journey through the six seasons you have watched time and time again—but it's organized so you can dip in at any time, at any place. Roam around as though you’re in Tony’s backyard for a BBQ...

Holy Cross Crew Pays Tribute to The Sopranos Off the Back of a Truck: Unofficial Contraband for the Sopranos Fan is as much a Sopranos party as it is a book. It was also Nick Braccia’s way of showing his appreciation and gratitude to his Holy Cross mentor, Steve Vineberg, and his fellow classmates. The book includes essays and chapters created entirely by the Holy Cross community. Vineberg on acting, Joe Mader, formerly of the Holy Cross Theatre Dept, on art and the episode, “Second Opinion” and Jon Hastings ’98 on psychiatry. Andy Cambria, ’00 and Mark Dellelo, ’98 provide a multitude of essays on topics ranging from music to cinematography. This crew of Crusaders represents just a fraction of the eclectic and vibrant voices who appear in the book, which received a starred review from The Library Journal and fine notices from Kirkus and Publisher’s Weekly.

Nick Braccia (Holy Cross '98) is a Cannes Lions– and Clio–winning writer, director, and producer. In 2018, he cocreated and coexecutive produced the horror podcast Video Palace for AMC Network’s streaming service Shudder. While working at the marketing agency Campfire, he helped to develop immersive, narrative experiences for TV shows like Outcast, Sense8, Watchmen, The Man in the High Castle, Westworld, and The Purge. Braccia is a member of the Producers Guild of America and lives in Manhattan with his partner, Amanda, and daughter, Evie Blue.

Off the Back of a Truck: Unofficial Contraband for the Sopranos Fan (Hardcover)

END_OF_DOCUMENT_TOKEN_TO_BE_REPLACED

This feature require that you enable JavaScript in your browser.
END_OF_DOCUMENT_TOKEN_TO_BE_REPLACED

This feature require that you enable JavaScript in your browser.
END_OF_DOCUMENT_TOKEN_TO_BE_REPLACED

This feature require that you enable JavaScript in your browser.
END_OF_DOCUMENT_TOKEN_TO_BE_REPLACED