"Always polite, always a gentleman, he paved the way for Jackie Robinson and the rest of the Black athletes that the country now takes for granted." —Al Southwick from an article in the Worcester Telegram & Gazette, 2001 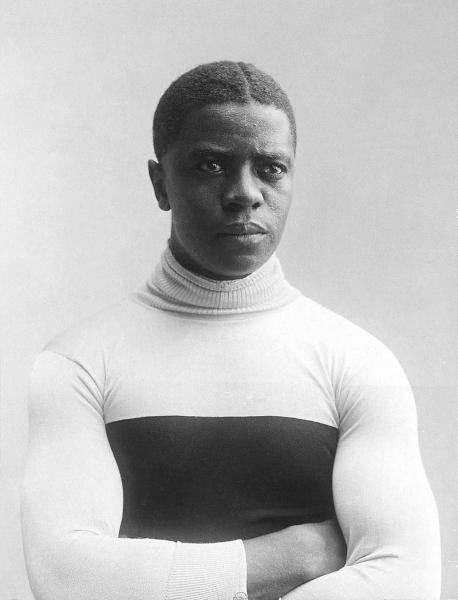 Opening in 2021, a new museum will honor the life and legacy of Worcester resident Marshall “Major” Taylor, who in 1899, became the first African American cycling world champion. The 1,700 square foot museum honoring the man also known as the “Worcester Whirlwind” will be in the redeveloped Old Worcester Courthouse, 2 Main St. The museum space will include vintage photographs, memorabilia and an active cycling experience. For up to date infomation, please visit the Major Taylor Association website. Taylor opened the door for other Black athletes in amateur and professional sports. For a list of books on this topic , see below.

Marshall Walter "Major" Taylor (November 26, 1878 – June 21, 1932) was an American professional cyclist. He was born and raised in Indianapolis, where he worked in bicycle shops and began racing multiple distances in the track and road disciplines of cycling. As a teenager, he moved to Worcester, Massachusetts, with his trainer and had a successful amateur career, which included breaking track records.

Taylor turned professional in 1896, at the age of 18, living in cities on the East Coast and participating in multiple track events including six-day races. He moved his focus to the sprint event in 1897, competing in a national racing circuit, winning many races and gaining popularity with the public. Between 1898 and 1899, he set numerous world records in race distances ranging from the quarter-mile (0.4 km) to the two-mile (3.2 km).

Taylor won the sprint event at the 1899 world track championships to become the first African American to achieve the level of cycling world champion and the second black athlete to win a world championship in any sport (following Canadian boxer George Dixon, 1892). He was also a national sprint champion in 1899 and 1900. He raced in the U.S., Europe and Australasia between 1901 and 1904, beating the world's best riders. After a 2 1⁄2-year hiatus, he made a brief return in 1907, before retiring aged 32 to his home in Worcester in 1910.

Towards the end of his life Taylor faced severe financial difficulties. He spent the final two years of his life in Chicago, Illinois, where he died of a heart attack in 1932. Throughout his career he challenged the racial prejudice he encountered on and off the track and became a pioneering role model for other athletes facing racial discrimination. Several cycling clubs, trails, and events in the U.S. have been named in his honor, as well as the Major Taylor Velodrome in Indianapolis and Major Taylor Boulevard in Worcester. Other tributes include memorials and historic markers in Worcester, Indianapolis, and at his gravesite in Chicago. He has also been memorialized in film, music and fashion.

Excerted from Wikipedia and other web sources

END_OF_DOCUMENT_TOKEN_TO_BE_REPLACED

This feature require that you enable JavaScript in your browser.
END_OF_DOCUMENT_TOKEN_TO_BE_REPLACED

This feature require that you enable JavaScript in your browser.
END_OF_DOCUMENT_TOKEN_TO_BE_REPLACED

This feature require that you enable JavaScript in your browser.
END_OF_DOCUMENT_TOKEN_TO_BE_REPLACED