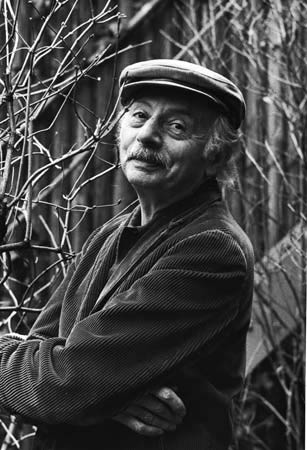 Stanley Kunitz became the tenth Poet Laureate of the United States in the autumn of 2000. Kunitz was ninety-five years old at the time, still actively publishing and promoting poetry to new generations of readers. In the New York Times Book Review, Robert Campbell noted that Kunitz's selection as poet laureate—the highest literary honor in America—"affirms his stature as perhaps the most distinguished living American poet." Atlantic Monthly contributor David Barber likewise cited Kunitz as "not only one of the most widely admired figures in contemporary poetry but also, rarer still, a true ambassador for his art."
From The Poetry Foundation

Kunitz was born in Worcester, Massachusetts, the youngest of three children, to Yetta Helen (née Jasspon) and Solomon Z. Kunitz, both of Jewish Russian Lithuanian descent.

His father, a dressmaker of Russian Jewish heritage, committed suicide in a public park six weeks before Stanley was born. After going bankrupt, he went to Elm Park in Worcester, and drank carbolic acid. His mother removed every trace of Kunitz's father from the household. The death of his father would be a powerful influence of his life.

Kunitz and his two older sisters, Sarah and Sophia, were raised by his mother, who had made her way from Yashwen, Kovno, Lithuania by herself in 1890,[8] and opened a dry goods store. Yetta remarried to Mark Dine in 1912. Yetta and Mark filed for bankruptcy in 1912 and then were indicted by the U.S. District Court for concealing assets. They pleaded guilty and turned over USD$10,500 to the trustees. Mark Dine died when Kunitz was fourteen, when, while hanging curtains, he suffered a heart attack.

At fifteen, Kunitz moved out of the house and became a butcher's assistant. Later he got a job as a cub reporter on The Worcester Telegram, where he would continue working during his summer vacations from college.

After Harvard, he worked as a reporter for The Worcester Telegram, and as editor for the H. W. Wilson Company in New York City. He then founded and edited Wilson Library Bulletin and started the Author Biographical Studies. Kunitz married Helen Pearce in 1930; they divorced in 1937. In 1935 he moved to New Hope, Pennsylvania and befriended Theodore Roethke.He married Eleanor Evans in 1939; they had a daughter Gretchen in 1950. Kunitz divorced Eleanor in 1958.

At Wilson Company, Kunitz served as co-editor for Twentieth Century Authors, among other reference works. In 1931, as Dilly Tante, he edited Living Authors, a Book of Biographies. His poems began to appear in Poetry, Commonweal, The New Republic, The Nation, and The Dial.

During World War II, he was drafted into the Army in 1943 as a conscientious objector, and after undergoing basic training three times, served as a noncombatant at Gravely Point, Washington in the Air Transport Command in charge of information and education. He refused a commission and was discharged with the rank of staff sergeant.

After the war, he began a peripatetic teaching career at Bennington College (1946–1949; taking over from his friend Roethke).He subsequently taught at the State University of New York at Potsdam (then the New York State Teachers College at Potsdam) as a full professor (1949-1950; summer sessions through 1954), the New School for Social Research (lecturer; 1950-1957), the University of Washington (visiting professor; 1955-1956), Queens College (visiting professor; 1956-1957), Brandeis University (poet-in-residence; 1958-1959) and Columbia University (lecturer in the School of General Studies; 1963-1966) before spending 18 years as an adjunct professor of writing at Columbia's School of the Arts (1967-1985). Throughout this period, he also held visiting appointments at Yale University (1970), Rutgers University–Camden (1974), Princeton University (1978) and Vassar College (1981).

After his divorce from Eleanor, he married the painter and poet Elise Asher in 1958. His marriage to Asher led to friendships with artists like Philip Guston and Mark Rothko.

Kunitz's poetry won wide praise for its profundity and quality. He was the New York State Poet Laureate from 1987 to 1989. He continued to write and publish until his centenary year, as late as 2005. Many consider that his poetry's symbolism is influenced significantly by the work of Carl Jung. Kunitz influenced many 20th-century poets, including James Wright, Mark Doty, Louise Glück, Joan Hutton Landis, and Carolyn Kizer.

For most of his life, Kunitz divided his time between New York City and Provincetown, Massachusetts. He enjoyed gardening and maintained one of the most impressive seaside gardens in Provincetown. There he also founded Fine Arts Work Center, where he was a mainstay of the literary community, as he was of Poets House in Manhattan.

He was awarded the Peace Abbey Courage of Conscience award in Sherborn, Massachusetts in October 1998 for his contribution to the liberation of the human spirit through his poetry.

He died in 2006 at his home in Manhattan.He had previously come close to death, and reflected on the experience in his last book, a collection of essays, The Wild Braid: A Poet Reflects on a Century in the Garden.
From Wikipedia

The Wild Braid: A Poet Reflects on a Century in the Garden (Paperback)

END_OF_DOCUMENT_TOKEN_TO_BE_REPLACED

This feature require that you enable JavaScript in your browser.
END_OF_DOCUMENT_TOKEN_TO_BE_REPLACED

This feature require that you enable JavaScript in your browser.
END_OF_DOCUMENT_TOKEN_TO_BE_REPLACED

This feature require that you enable JavaScript in your browser.
END_OF_DOCUMENT_TOKEN_TO_BE_REPLACED